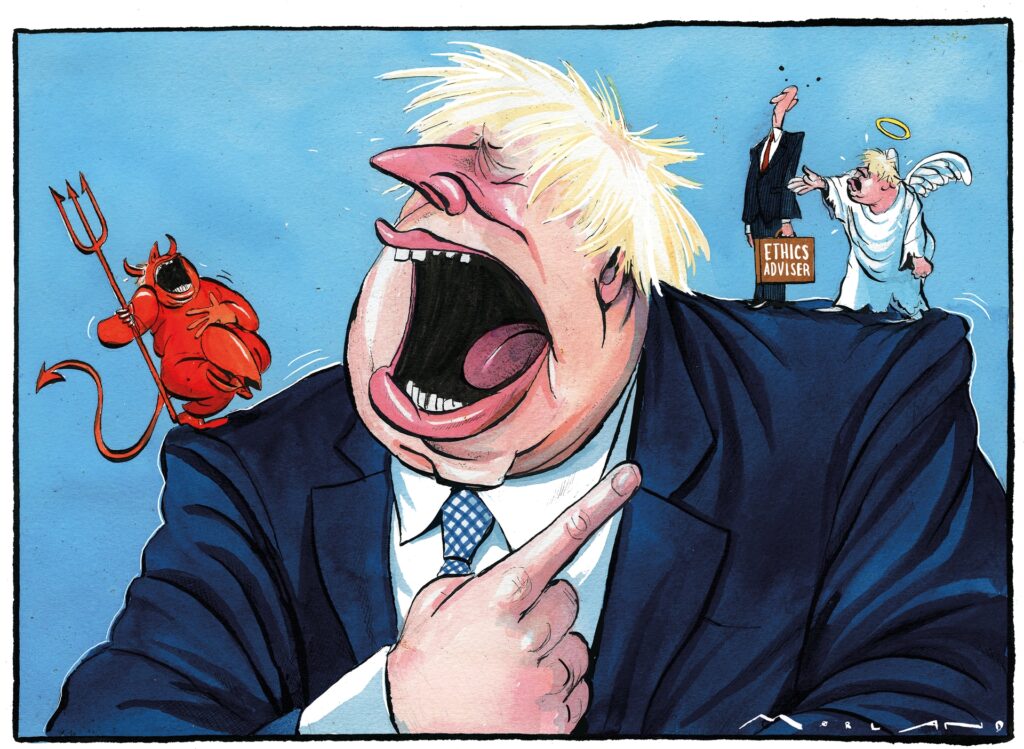 Morten Morland
«There is in him a vein of anarchy»: Boris Johnson.

The Case for Boris

With astonishing regularity, the imminent end of Boris Johnson as British Prime Minister is announced. What his gravediggers overlook is the power of the magic that made the oddball blond a man of the people, says his biographer Andrew Gimson.

Boris Johnson’s opponents have again and again made the mistake of declaring his career finished. One day, of course, they will be right: every career must end eventually. And they are also right to point out that Johnson has grievous faults. But those faults make them so angry they become blind to his virtues. If one were to read only what his critics say, his successes would become incomprehensible. How, one wonders, could voters ever have placed their faith in such a liar, such a scoundrel? The British must be either stupid or corrupt. That is the melancholy conclusion to which one is forced if one reads only the denunciations of Johnson.

There is actually a third possibility, which is that the British see some virtues in Johnson. They do not suppose him to be perfect, but they find him preferable to many other members of the political class. There is a kind of careerist who rises in politics by never saying anything memorable, never defying the party hierarchy, bowing down before every fashionable nostrum and avoiding any hint of risk, danger or originality.

Johnson is plainly not that kind of politician. He has the courage sometimes, indeed often, to do things his own way, and to take risks. Voters admire courage. Before the EU referendum in 2016, he could have become (or could at least have tried to become) a loyal subordinate to the then Prime Minister, David Cameron. He could have campaigned for Britain to stay in the EU, and Cameron would have rewarded him with a senior ministerial post had he helped that side to victory.

But Johnson instead chose the riskier path of advocating Brexit. Freedom is dangerous. The Financial Times, the Confederation of British Industry, the universities, a large part of the City of London and the greater part of the British Government were against leaving the EU, and warned of immediate economic collapse were voters rash enough to vote to leave. Britain would be hurled at once into a recession. We would all be instantly and irreparably impoverished.

Johnson was the most prominent figure to defy this conventional wisdom, and his advocacy may well have been decisive, for Britain only voted by 52 to 48 per cent to leave the EU. Voters who had been neglected for generations declined to do as the Financial Times told them, and hailed Johnson as their champion. His critics regard this as unforgiveable. They think of themselves as the true champions of the people. Their weakness is that they do not spend much time getting to know the people, or listening to the people’s concerns. They are like the liberals of 1848, of whom Alexander Herzen wrote so brilliantly in From the Other Shore, after the revolutions of that year had failed:

“It was easier for liberalism to invent the people than to study it. It told lies about it out of love, no less than others had out of hate. The liberals constructed their people a priori, created it out of memories of things read, dressed it up in a Roman toga... No one thought about the real people. It lived, laboured, suffered nearby, round the corner… Liberals always lived in large towns and small circles. They were men of books, journals, clubs; they did not know the people at all.”

Johnson somehow does know the people. He achieves this not by being one of them: he was educated at Eton College, which has produced 20 of Britain’s 55 Prime Ministers, and at Balliol College, Oxford, which has produced four PMs, including Johnson. The liberal intelligentsia assumed this must mean he was out of touch, that he could speak only for the privileged classes, while they were on the side of the workers.

The reverse turned out to be true. The liberals never spent any time with the workers, harboured indeed a certain scorn for them, but presumed to tell them what to think. The workers were instructed to vote for Britain to stay in the EU, and if they objected that their wages were being undercut by the free movement of labour, were told they were racists. The liberals wielded a moral club with which they sought to intimidate everyone else into agreeing with them.

Johnson stood out against this intimidation. He rejected the priggish morality of the liberals, and said that true freedom lay in voting for Brexit, so the British Parliament, elected by British voters, made laws for the British people, enforced by British courts. I should mention in passing that for various reasons, on which there is no need to waste space here, I voted to remain in the EU, and assumed a majority of my compatriots would agree with me.

I was mistaken. Johnson understood the nation better than I did, and better than Britain’s
liberal intelligentsia did. This the liberals find unforgiveable. They have therefore sought, ever since he became PM in the summer of 2019 on a promise, soon fulfilled, to “get Brexit done”, to throw him out of office, preferably without the formality of an election at which the workers might once again refuse to do as they are told.

The scandal of the parties during lockdown in Downing Street came as manna from heaven to the liberals. Every prig in the land began denouncing Johnson. Here was a man who had introduced strict lockdown rules, yet had allowed his own staff to flout them, had even drunk Prosecco with them, and had given a series of mendacious accounts of what had gone on. How intolerable! How immoral! He must go!

On the evening of Monday 6 June 2022, 148 Conservative MPs, 41 per cent of the total, agreed with this view. It was not only the liberal intelligentsia which found the Prime Minister’s behaviour intolerable: so did many of his closest Conservative colleagues, and indeed many Conservative voters. This was without question a stinging rebuke to Johnson, and perhaps before long he will be forced to step down. By his lax behaviour during the pandemic, he had shocked many who until recently had supported him.

But although the Conservatives are behind Labour, the main opposition party, in the polls, it is normal to be behind at this point in the electoral cycle, and the margin is not so great that recovery is impossible. When the next election comes – it has to be held at latest in December 2024 – the nation may yet decide it prefers Johnson to the moralists who are so loud in their condemnation of him. For Johnson connects with people, and cheers them up. He tells jokes, and his jokes have a subversive quality. There is in him a vein of anarchy. The liberal prigs find this shocking. They see no place for laughter in politics. Still less do they approve of anarchy. They do not see that for at least a part of the British nation, the anarchy at which they shudder is another name for freedom.

Andrew Gimson is the author of Boris: The Making of the Prime Minister, and of a second volume, Boris Johnson: Portrait of a Troublemaker at Number Ten, to be published on 29 September 2022.