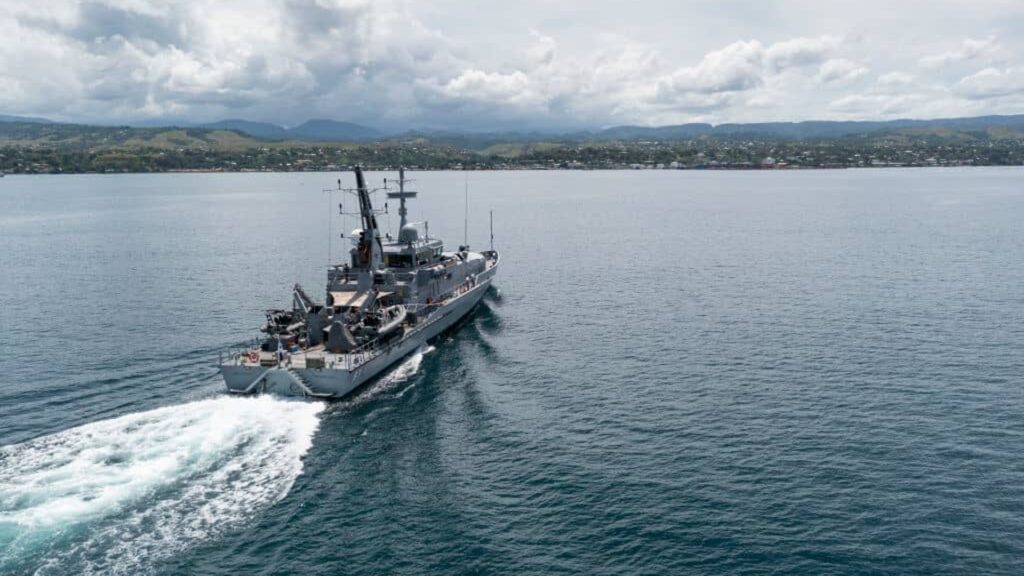 An Australian ship heads towards the port of Honiara, Solomon Islands (Photo: Getty)

China Trouble in the South Pacific

China’s sequestration of the Solomons from the South Pacific Forum is a significant geopolitical loss and embarrassment to the West.

Spheres of influence are so 20th Century’ we were told when Russia claimed historic rights to Ukraine. Such comments came back to bite western observers last week after China launched an audacious realignment of South Pacific politics when it secured an exclusive security pact with the Solomon Islands.

This country, an archipelago comprising six main islands and hundreds of smaller ones off the east coast of Papua New Guinea, is a member of the South Pacific Forum, Australia’s equivalent of NATO. It is the gateway to Australia and New Zealand. Control the Solomons and you threaten US-Australian trade routes.

In the early engagements of the Pacific War, Guadalcanal, the main island of the Solomons, was where the Imperial forces of Emperor Hirohito sought to build a naval base to interdict supply to Australia. The Battle of Guadalcanal became the iconic turnaround battle of the Pacific War in which US forces halted Japan’s advance; it featured in the opening two episodes of The Pacific [2010], the much-lauded HBO mini-series. The Solomons was also the scene of the first ever carrier-on-carrier engagement, the Battle of the Coral Sea, and subsequently two of the other five carrier battles in history.

China’s sequestration of the Solomons from the South Pacific Forum is thus a significant geopolitical loss and embarrassment to the West. A major element of the deal is that China will be provided with naval facilities. In response Karen Andrews, Australia’s Home Affairs minister, declared that it is ‘our backyard. This is our neighbourhood’ - in other words a sphere of influence.

Canberra’s fears are reflected in the precipitous colding of China-Australia relations that had seemed anything but hostile a decade earlier. In 2012 Labour Prime Minister Julia Gillard launched a White Paper, ‘Australia in the Asian Century’ which sought to balance its historically close relationship with the US. Since then, relations have soured. Perceptions of Chinese motives changed with China’s increasing aggression in the South China Sea.

Problems in the South Pacific have been brewing for a while. As my friend John McCarthy, a former ambassador to the US and Japan, has told me, ‘in recent years Australia has not done enough for the South Pacific Nations’. These impoverished island nations, including Samoa, Tonga, Tuvalu, New Caledonia, French Polynesia, Vanuatu, Nauru, Cook Islands, Fiji, Niue and Papua New Guinea have been largely excluded from Australia’s remarkable economic success so far this century.

No wonder then that China with an open cheque book and suspected copious bribes has been able to subvert the Solomons. A warning shot came in 2019 when the Solomon Islands switched its diplomatic support to China from Taiwan, formally the development partner of the South Pacific Forum. Immediate benefits accrued; China agreed to build a 12,000-seater stadium to host the South Pacific Games in 2022.

The South Pacific covers an area more than double the size of China; it is a far-away geographical region little understood in the West. But for Australia it is important; as their Prime Minister, Robert Menzies, explained in 1939, ‘What Britain calls the Far East is to us the Near North.’

The US and Australia are now in a race to catch-up in the South Pacific versus an adversary, China, which has had a ten-year lead in its bid to undermine Western influence. In February this year US Secretary of State, Anthony Blinken, belatedly announced that it would reopen its embassy on Guadalcanal. It has been closed since 1993.

One can only conclude that the West’s ‘China containment’ strategy increasingly resembles a game of whac-a-mole; contain one problem and another one raises its ugly head.