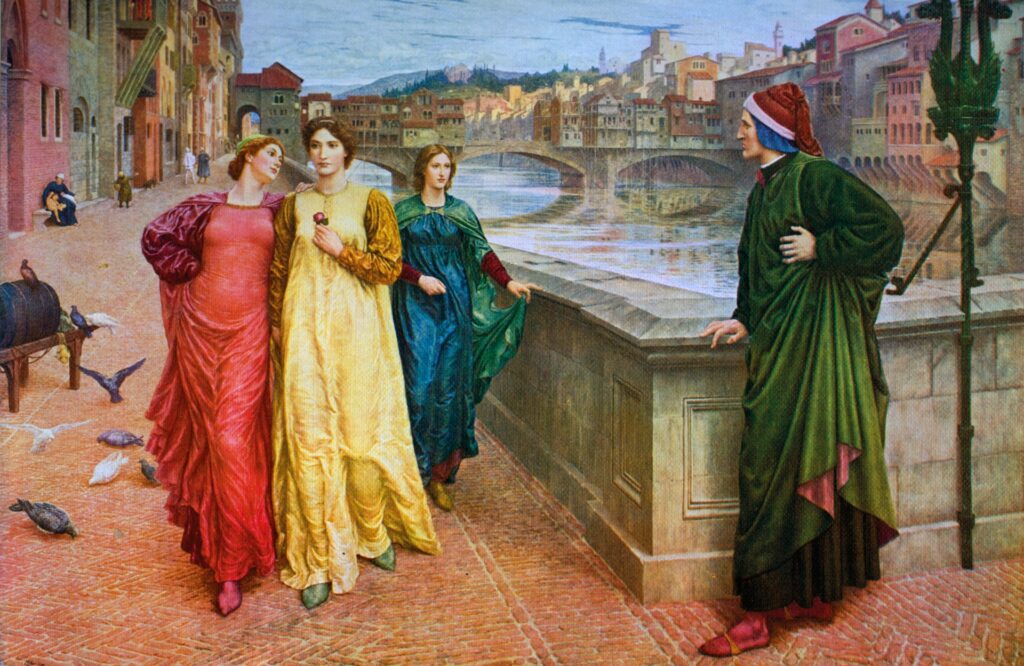 The Print Collector / Alamy Sto / Alamy Stock Photo
God, apparently as a prank, devised two sexes and called them “opposite”: ‘Dante and Beatrice’ by Henry Holiday, 1883).

What women mean when they don't say “Yes”. A guide for men.

Women and men speak a different language. We really need those little United Nations headphones to decode and translate what we really mean. For example, when a woman says “I’m fine” she most certainly is not; and she’ll require a lot of chocolate to get over it.

When a woman says “We need to talk” that means she needs to talk and you need to listen.

When a woman says “Hungry? No. Not at all,” that means “I’m starving and if you don’t whisk me into a restaurant immediately, I’m going to gnaw your leg off.”>

“Marriage? Kids?... I’ve never really given it much thought,” decodes as “the snooze alarm has gone off on my biological clock and I’m ovulating so get naked, big boy!”

The breakdown in communication between the sexes has become so chronic that in Sweden, couples have to fill in a form to consent explicitly to having consensual sex. Yep. Casual sex has become very formal indeed. Soon prospective partners will require C.V.’s, blood tests, family trees....

This type of bureaucratic foreplay has now found its way to Switzerland. New, tighter laws have enshrined the fact that if a woman indicates verbally or non verbally that she does not want to have sex with a man, there must be no sex. No means No.

Of course, all decent men know and respect this sentiment. But outside the boudoir, ‘no’ is a very nuanced word. For example, when a woman says, “No, don’t get me anything special for my birthday” what this means “Yes, buy jewellery.”

When a woman says “No, nothing’s wrong” this translates as “Yes everything’s wrong! And because you didn’t notice, I’ll see you in divorce court.”

When it comes to dating, “no” can often simply mean “I don’t trust men, so you need to prove yourself.” And you can’t blame us women for being wary and sceptical. Dating means gambling with fate and losing so many times, a girl gets roulette rash.

Yes, your charm may be more disarming than a UN peace keeping force, but she’s worried you’re friendly in the way an intestinal parasite is friendly. Are you really a top order predator whose ‘charm’ just means he’ll you’ll say ‘thankyou’ after you rape her?

And even if she’s sure you’re not a predator, it’s not prudery making her say No. Just because a woman can hide the primal engorgement of her libidinous organ, doesn’t mean she does not want to discover the supple hydraulics of your manhood right now,  but she’s endured so many duds. Most men are good with their hands; they can fashion a temporary cistern ball float with a squeezy bottle and a coat hanger in five minutes flat...and yet can’t find a G spot? Location! Location! Location! That’s all there is to say about the G spot, really. What females can’t understand is how a man can determine the exact mile to the gallon ratio of a five hour trip to the south of France… where he effortlessly locates the remote fishing village that’s not even on a map – yet he can’t find your clitoris? No, the truth is he just can’t be bothered to find it.

Which is why she’s now thinking - who needs a dud lay when sex with George Clooney is only the flick of a light switch away?

Yes, her nipples may be so erect she can pick up the BBC World Service, but it doesn’t matter because she’s been hurt, betrayed and disappointed too many times. She needs proof that you’re different. Yes, a woman can say ‘No’ to love…but sometimes love won’t listen. And this is where men need to not take no for an answer.

If a bloke is really smitten, then it’s his job to persuade the object of his desire that he’s worthy of her trust. As all the great scribes have shown us, from William Shakespeare to John Donne, the art of persuasion is an ardent lovers most compelling asset. If a woman doesn’t believe in love at first sight, perhaps you just need to walk by again…

But to save time and misunderstandings, let me give you fellas a glimpse into the female psyche. So, what do women really want? Oh, nothing special. As long as he has pectorals, a PhD, a peachy posterior, a non-sexist attitude, a top tan, a well-read penis, can cook soufflés, arm-wrestle crocodiles, wants a loving relationship with bone-marrow-melting sex... Now, is that too much to ask of a billionaire?

No, what we really want is a man who’s perfect enough to understand why we are not… (Especially when we poke fun at your species by madly generalising!)

We also crave a man who can communicate. A woman often feels that her small intestine communicates with her more often than her male partner.  Wordplay is foreplay for females. Nothing excites us more than a man with a big throbbing organ - the one between the ears. The brain is the only one place where size does count.

And to the legislators I would say – don’t forget “Much Ado About Nothing”. The barbed banter between Beatrice and Benedick is the Wimbledon of wit, as these two reject, roast and rebuke each other. But their furious flirting is a romantic hors d’oeuvre: an amuse bouche:  an appetizing course of discourse to wet their amorous appetites. They both say no, but both mean yes.

But if authorities insist on compelling couples to fill in consent forms, I feel I speak for all females when I say we’d like to add a few more clauses. Could we also get men to agree not to pee on the porcelain. Or play air guitar. Or think that sitting on the toilet is a leisure activity. Or have pet names for their penises. Or think that asking for directions is a slur on their masculinity.

We’d also like men to agree in writing that ‘mutual orgasm’ is not an insurance company. And to find our G spots without a list of edible berries and a compass.

An agreement to do the odd sensitive thing with mange tout in the kitchen would also be most welcome. (The way to a woman's heart is through her stomach. That is not aiming too high.)

God, apparently as a prank, devised two sexes and called them "opposite." But it’s important to remember that there are only about five chromosomes which separate us. The sex war has raged for 5,000 years so it's time we called a truce... starting with men negotiating their terms of surrender.

What decent man would say “No” to that?